New on DVD:
WE DON’T VACCINATE – THE MYTHS AND REALITY OF THE VACCINATION CAMPAIGNS

The 100-minute-documentary „We Don’t Vaccinate“ is the most successful film in Germany, Austria and Switzerland, questioning vaccination! 10.000 DVDs of the German original version („Wir Impfen Nicht!“) were sold as pre-sale-orders in April 2014, more than 150.000 people have watched the German version for free on Youtube during the last 11 months.

Expected on December 1st, the DVD will be available in Canada, the USA and Great Britain. The English version is completely overvoiced with three English narrators. We are proud, to offer this DVD also to you, boxed, for 19,90 €. Orders coming in until December 15th will receive an additional FREE DVD in a white paper bag instead of a box. The version offered here is PAL, suitable for all DVD-Players in Europe, Africa, Asia and Australia/New Zealand.

Here are some reviews on „We Don’t Vaccinate“:

I want to say that in my 20 years of the vaccine battle and the many many documentaries I have watched this is one of the most superior!! There is no middle ground of „But vaccines are safe“ that many american videos do. We Don’t Vaccinate is taking every single myth and 100 years of vaccine medical brainwashing done and addressing it. I hope when this is eventually put out there I can openly share this. Incredible job!
Robin Saxton Goffe, Mother of an autistic child and Family Herbalist

“We Don’t Vaccinate” is a sensitive, expressive and discerning documentary. Rivetingly factual, it stays solely on the vaccine track tackling the contemporary vaccine issue like no other film before it. Out of Germany, the originating homeland of Merck & GlaxoSmithKline, Michael Leitner’s documentary, “We Don’t Vaccinate” deserves a widespread worldwide audience so that the mass hypnosis which allows these pharmaceutical companies to commit crimes against humanity can finally come to an end.
Eileen Dannemann, Director, National Coalition of Organized Women

‚We Don’t Vaccinate‘ – at last a documentary that tackles the issue of vaccination full on. The presentation style is to be commended and the information and facts are put across sensitively in a calm and straightforward manner. The subject of vaccination is enormous – this film highlights some of the main concerns which should lead the viewer to delve into the subject further and open their eyes to the true reality of this so-called ’scientific‘ procedure. Films such as this will further the cause to wake up the unknowing public into seeing through the propaganda and medical control of the drug industry and bring some hope for the children of tomorrow.
Magda Taylor, Director of The Informed Parent, UK 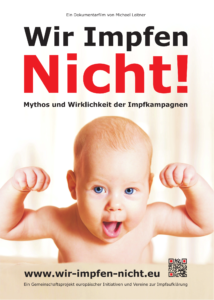